Owned by the SCPI Accès Valeur Pierre, the asset has undergone an ambitious restructuring, which is now coming to an end.

"This redevelopment operation illustrates both the transformation and asset enhancement strategy of Accès Valeur Pierre, the asset management know-how and real estate convictions of BNP Paribas REIM, and the ambitious ESG roadmap set by the management company," emphasises Sigrid Duhamel, Chairman of the Management Board of BNP Paribas REIM France.

The SCPI Accès Valeur Pierre, managed by BNP Paribas REIM France, owns a group of office assets located across Paris and the Western Crescent. It is pursuing a policy of modernising its historic assets, with the dual objective of increasing rental income and creating value.

The 185 Charles de Gaulle project is an emblematic example of the implementation of this strategy. The asset has been gradually acquired by the SCPI since the 1970s. Following the departure of the former tenant in 2018, BNP Paribas REIM has put into practice its convictions in terms of office property and ESG (Environmental, Social and Governance) commitments: the search for flexibility and reversibility of spaces, the emphasis on user-friendliness, services and well-being, and the objective of obtaining BREEAM Excellent, WiredScore, WELL Gold and E+C- labels and certification. The signing of BEFAs (leases in the future state of completion) with two leading international groups, prior to the completion of the works, demonstrates the relevance of this approach.

The project was designed around three axes: integrating the building into its environment, creating a new work tool and imagining a new place to live. It consisted of the demolition of part of the superstructure, the heavy restructuring of the rest of the building (including the infrastructure) and the creation of numerous green spaces. During the demolition phase, the principles of the circular economy were widely implemented. Thus, 97% of the waste was recycled. During the construction phase, an objective of zero final waste was set, reused materials and low-carbon concrete were used. In the end, this exemplary construction site generated a CO2 saving of 33% compared to a standard construction site. 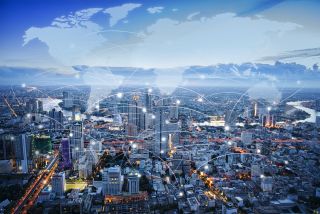 The inauguration of the building complex marks the completion of the project, which was carried out by BNP Paribas REIM as delegated project manager, THEOP as assistant project manager, Arte Charpentier Architectes as commissioned architect (architecture, interior design and landscape design) and project manager, and Bouygues Bâtiment Ile-de-France - Rénovation Privée as general contractor.

Thanks to the positive feedback from 185 Charles de Gaulle, a pilot project for the zero waste approach, we have generalised the sorting of waste on site for all Rénovation Privée projects. We now have a better understanding of the types and quantities of waste generated by our sites, enabling us to get a little closer to 100% recovery. In order to support BNP Paribas REIM in its low-carbon ambitions, we have also carried out a "green clean-up" of the building, as well as an extensive re-use programme," comments Jessica Jung, Managing Director of Bouygues Bâtiment Ile-de-France - Private Renovation.

Read more of our articles...