The ability of households in France to purchase real estate finished 2017 at a high level, with a value of 114 compared to the base average level of 100. In other words, at the end of 2017, households were able to buy 14% more space than their average ability over the long term.

"Households' ability to acquire real estate changed a lot between 2007 and 2017, rising by 31% throughout France. Over this period, house prices have changed little while revenues have progressed moderately; the fall in mortgage rates of over 300 basis points is the main reason for high acquisition ability of households today" explains Olivier Bokobza, Managing Director of BNP Paribas Real Estate Residential division. 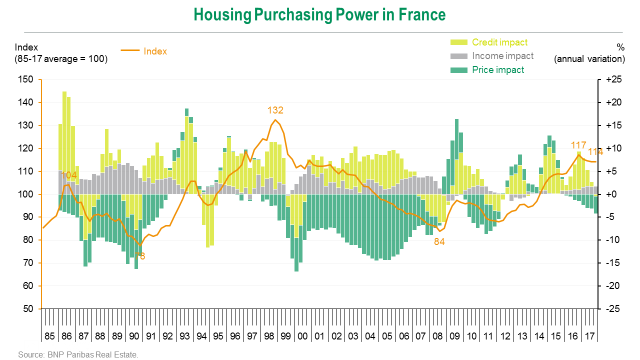 In fact, house prices have had little to do with this sharp increase in acquisition capacity as they have remained broadly stable throughout France as a whole over the last 10 years to end 2017 (-1%). Average household revenues significantly increased (+15 %) between 2007 and 2017, outpacing inflation (+13 %). Meanwhile, the number of households rose by 9% over the same period, almost twice as fast as the population (+5%), due to well-known societal factors: couples getting together later, rising number of single parents, different generations living under different roofs and an aging population. All told, revenue per household has only progressed very moderately (+5 %) in the space of 10 years, alone only slightly boosting property purchasing power. It is ultimately the change in financing conditions that explains almost all (87 %) of the rise in acquisition capacity, with a fall in mortgage rates of over 300 basis points and fairly stable average repayment timeframes (from 225 to 217 months, i.e. about 18 years).

Nevertheless, over 2017 acquisition capacity did edge down slightly (-3%). Household revenues increased (+2 % according to Insee) and lending conditions remained generally stable (with an average mortgage rate of 1.5% for durations of 18 years according to Crédit Logement CSA). Yet the increase in house prices over the same period, which was +4% over France as a whole (source Notaires-Insee), dented property purchasing power.

Even though prices rose in most regional cities in 2017, the pace of the increase, and consequently that of ability to purchase, varied greatly by location in France. Bordeaux saw the biggest annual growth (+12.9%), followed by Paris (+8.6%), Nantes (+6.3%) and Lyon (+5.2%) (source Notaires de France). Similarly, within the Parisian region, it was mainly the Inner Rim (+4.6%) that caught the price increases, rather than the Outer Rim (+2.4%), where acquisition ability mechanically rose more.

For 2018, most of the indicators suggest a continuation of the healthy trend for housing markets in France. "On the one hand, gross domestic product growth should be strong again in France (2.4% vs 2% in 2017). Household confidence is still high, with favourable opinions on their financial situation, the unemployment trend and the opportunity to make big-ticket purchases. Moreover, even though bond rates may rise in the coming quarters, the increase should remain limited, notably by the expected rigidity of inflation and the abundance of liquidity", estimates Richard Malle, Global Head of Research for BNP Paribas Real Estate.

In this context, house prices should continue to increase over 2018, after already significant growth in 2017, both for second-hand (+4%) and new homes (+3.7%). "The rise in property prices over the past two years is fairly healthy, as it has been driven by strong structural demand and financing conditions with lasting appeal. For 2018, we can reasonably expect prices to rise by about 3% for all new and second-hand homes in France", forecasts Olivier Bokobza.

The aim of the indicator of property purchasing power for households in France is to estimate the change in how much space a household is able to buy over time. Calculated quarterly from 1985, the indicator stands at an average of 100 over a long period. This base of 100 can be considered as a market equilibrium. When the level is above 100, the ability of households to acquire their housing is stronger than their average ability over the long term. Conversely, beneath the threshold of 100, their ability is not as good as the long-term average.

This indicator is calculated on the basis of three impacts, built such that the sum of their changes is equal to that of acquisition ability over time. Firstly, the revenue impact measures the change in gross available revenue per household and puts acquisition capacity on an upward trend. Next, the borrowing impact takes into account the change in financing conditions according to interest rates and the average duration of mortgages. Finally, the price impact diminishes acquisition ability when property values rise.