European office market activity is at a ten year high

Best take-up volume in a decade

2017 was a very successful year for the office letting market which achieved the best result by far in 10 years. The market thrived in most cities over the year, especially in the 3 largest countries, where large occupational deals boosted the market. Thanks to Germany’s good economic performance, the country’s 4 main markets were particularly active with a 23% growth over last year. Take-up grew (+11%) over 2016 in Central London where large occupier deals were 55% ahead of average levels. The volume of take-up was much higher than last year in Central Paris (+9%), where large units were the busiest segment in 2017. Most European markets followed this healthy trend, particularly Dublin (+45%), Warsaw (+30%), Madrid (+29%), Milan (+20%) or Amsterdam (+16%). 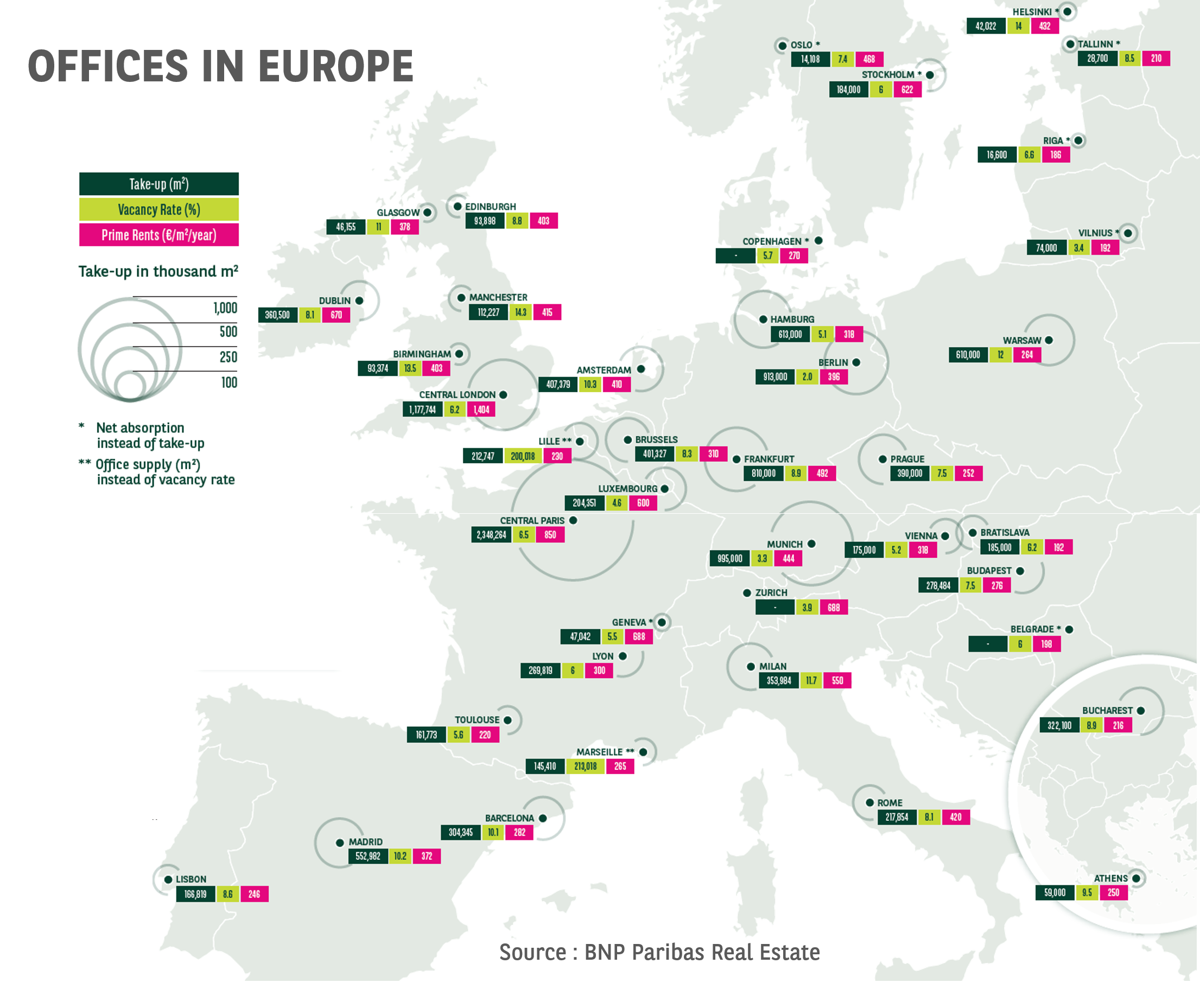 The total commercial real estate investment volume in Europe reached €253bn in 2017, 10% above 2016's result. “This is an all-time record year for the market, exceeding 2015's high of €245bn. This year the market benefited from a real impetus combining an: improving economy, lower vacancy rates and cash availability. Upturn in the European economy and the performance of the occupier markets fostered real estate’s appeal as an investment”, comments Larry Young, Head of International Investment Group at BNP Paribas Real Estate.

With 43% of the volume invested, offices remain the investor darling. This year was characterised by the sale of trophy assets such as Cœur Défense in Paris, the Walkie-talkie and the Cheesegrater in London, also the Sony Center in Berlin.

2017’s performance was led by German cities. The total of the 4 leading German markets puts them at the top overall. Almost half of the volume were mega deals (>€100m), which is a record. Central London is back to the first place of the European city ranking in 2017 with €16.8bn (+45%). Investors' earlier concern about the Brexit vote seems to have evaporated, since foreign investors continued to dominate the market. Central Paris is back to the second place and remained steady against 2016 (-1%).

*Total commercial real estate investment volume in Europe in the 25 studied countries in the report – The global volume reached €261bn in 2017.

Office yields continued their downward trend throughout Europe, reaching historic lows at the end of 2017.

Prime yields stood at 4.66% in Q4 2017 on average among the 40 markets analyzed in this report, 30 bps down on Q4 2016. Berlin’s prime office yield fell below the 3.0% mark, to hit 2.9%. This is the lowest office yield achieved in the European market. Key to this development is the expectation of further strong rental growth. This is followed by Munich (3.0%), Paris (3.05%) and Madrid (3.25%). In the post Brexit vote reaction, London office yield rose marginally, but this failed to gain traction and has since stabilized as the market activity improved.

“In this respect, most indicators point to positive momentum for the European office market in 2018. We anticipate that most occupier markets will record favourable trends, in vacancy rates, rental values and take-up. Office prime yields will most likely stabilise but average yields will continue to drop because of delay and spread effects. As a result, total returns for offices are expected to be robust again in numerous European cities in 2018. For investors, the main challenge will be to find assets that match their acquisition criteria. For 2018 we are expecting original strategies will be created to harvest more performance, by looking for market opportunities such as emerging locations, added-value assets and speculative schemes” concludes Richard Malle, Global Head of Research of BNP Paribas Real Estate. 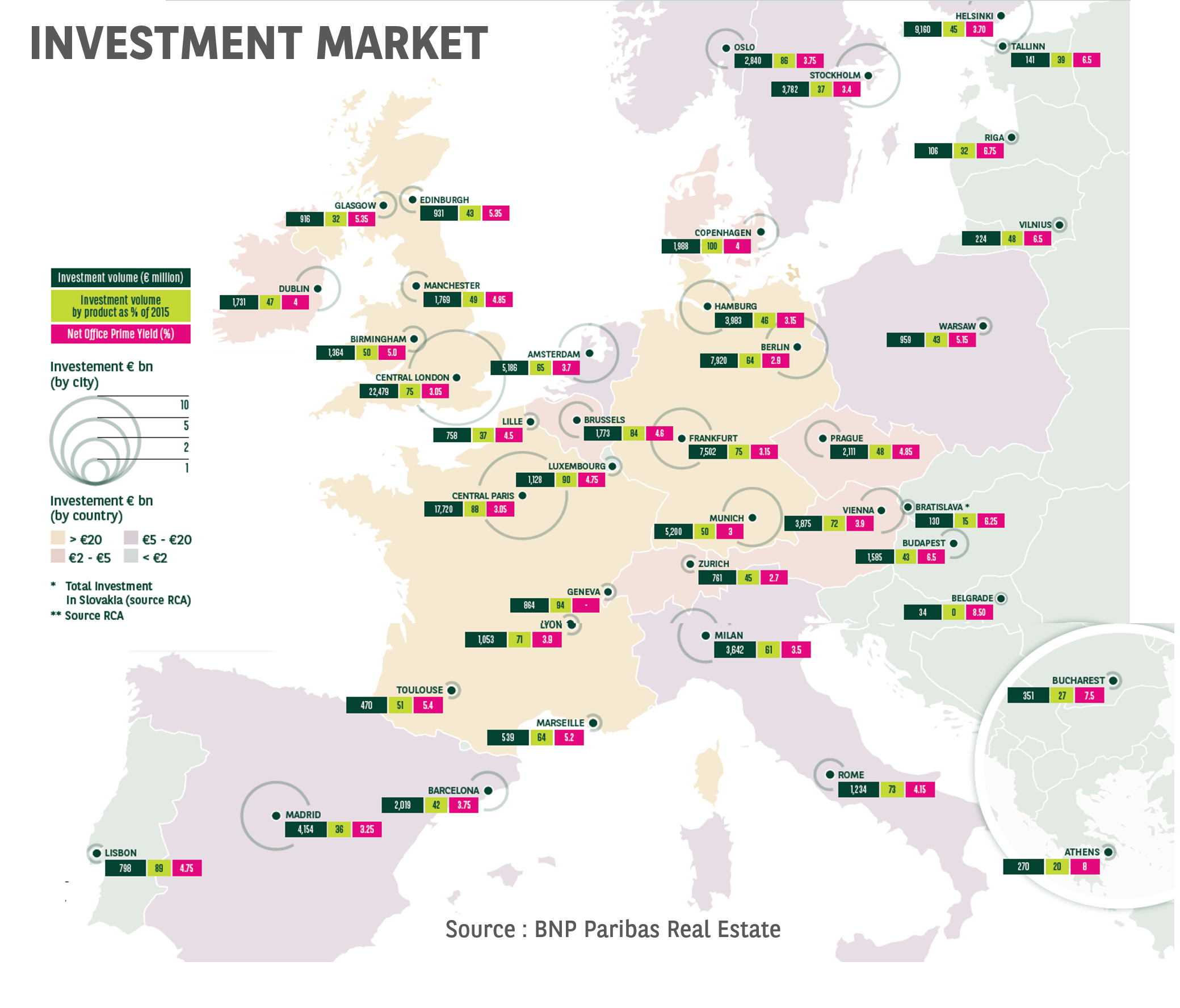