Office take-up in Europe increased in 2016 for the third year in a row; it is the best performance since 2007. However, Central London, the second largest European market, dropped by 17% as many occupiers halted expansion plans after the United Kingdom’s vote to leave the European Union. Southern European markets such as Milan (-15%) and Madrid (-11%) fell back after an exceptional year in 2015. In contrast, strong national economic fundamentals resulted in German markets reaching a new all-time high with 2.7 million m² transacted in the 4 main markets. The Central Paris office market finished the year 9% up on 2015, driven by transactions over 5,000 m² (+23%).

Office take-up in the main European cities amounted to 11.4 million m² and reflected a rise of +2% compared to 2015, on the back of a recovering labour market.

European markets vacancy rates kept on shrinking in 2016, led by German markets. Germany is experiencing massive demand and the lack of delivery is resulting in vacancy rates reaching new lows. Central London retains one of the lowest vacancy rates in Europe, but is starting to grow prompted by a drop in take-up combined with new supply (+140 bps compared to the end of 2015).

In view of this market situation, the combination of growing occupier demand and availability reduction is seeing prime rents rise in most markets including Berlin (+14%), Amsterdam (+5%), Brussels, Luxembourg and Madrid (+4%). Rental growth is also occurring in average rents in many locations.
The vacancy rate continued to diminish on average in the main European cities, supported by the combination of growing take-up and low level of completions. 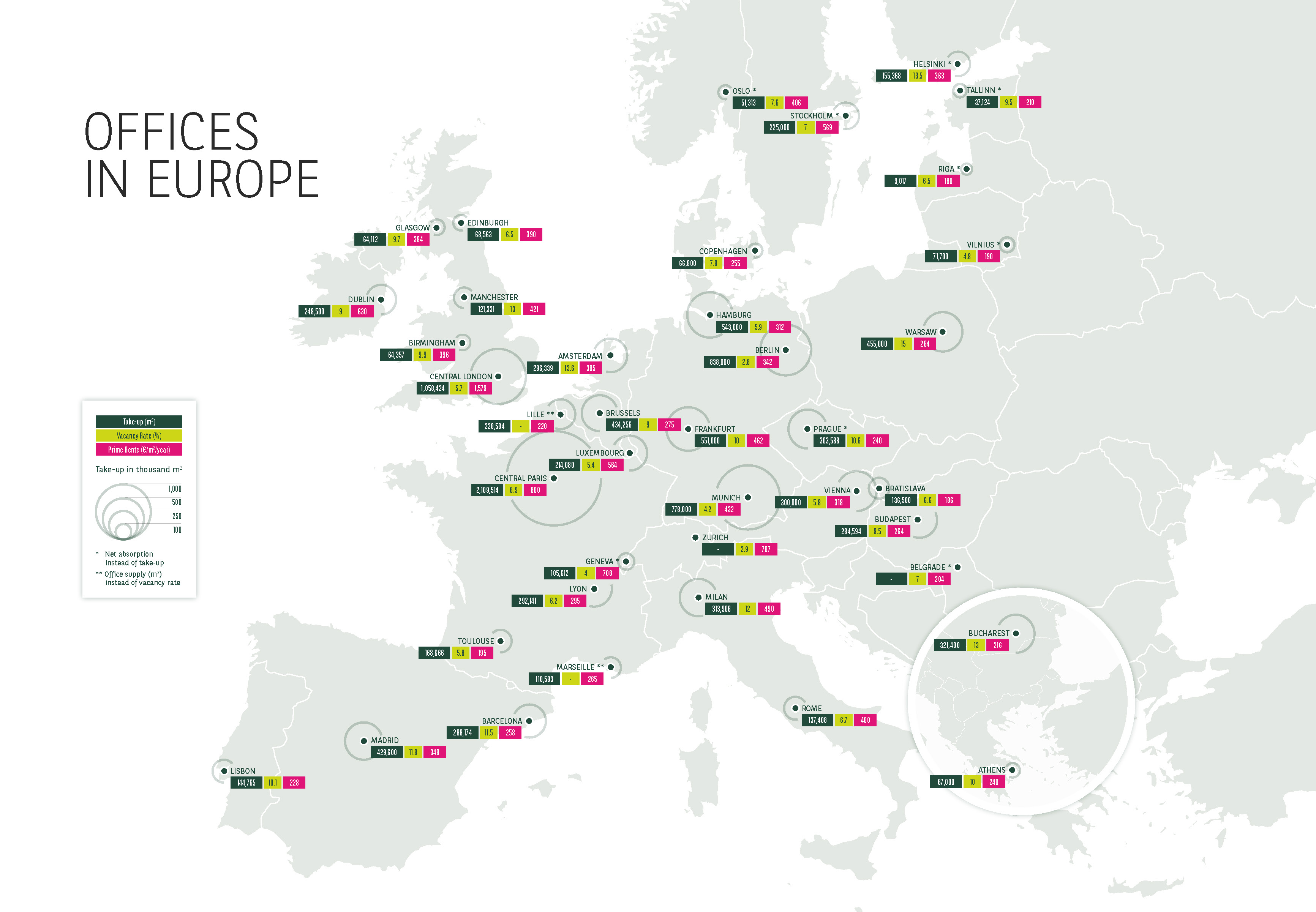 Paris is the #1 investment market in Europe

Céline Cotasson-Fauvet, Head of European Analysis at BNP Paribas Real Estate, said: “The share of foreign investors declined in 2016 of which American investments were the most impacted. This shift is not entirely surprising as American investors have predominantly focused on the opportunistic and valueadd end of the risk curve. These opportunistic funds have found scarcer opportunities in the markets where they have been particularly active in the last couple of years”.

Central Paris (€15.6 bn) is the number one office investment market in Europe for the first time in the past ten years, followed by Central London (€15.3 bn). In Paris volumes fell 6%, which was to be expected following 2015’s cyclical high, yet business is sustained and healthy. By contrast, in London the combination of issues, not in the least Brexit, resulted in quieter business and a reduction of 26%. The 4 main German markets totalled close to €15 bn of office investment. They all generated increases except Berlin which declined after a historic high reached in 2015. Milan and Madrid, after unprecedented figures reached in 2015, ended 2016 16% and 7% down respectively on 2015. Triple-digit growth was observed in Prague, Rome, Copenhagen and Warsaw. Amsterdam’s investment market was underpinned by strong economic fundamentals, boosting office investment volumes that rose 68% year-on-year. 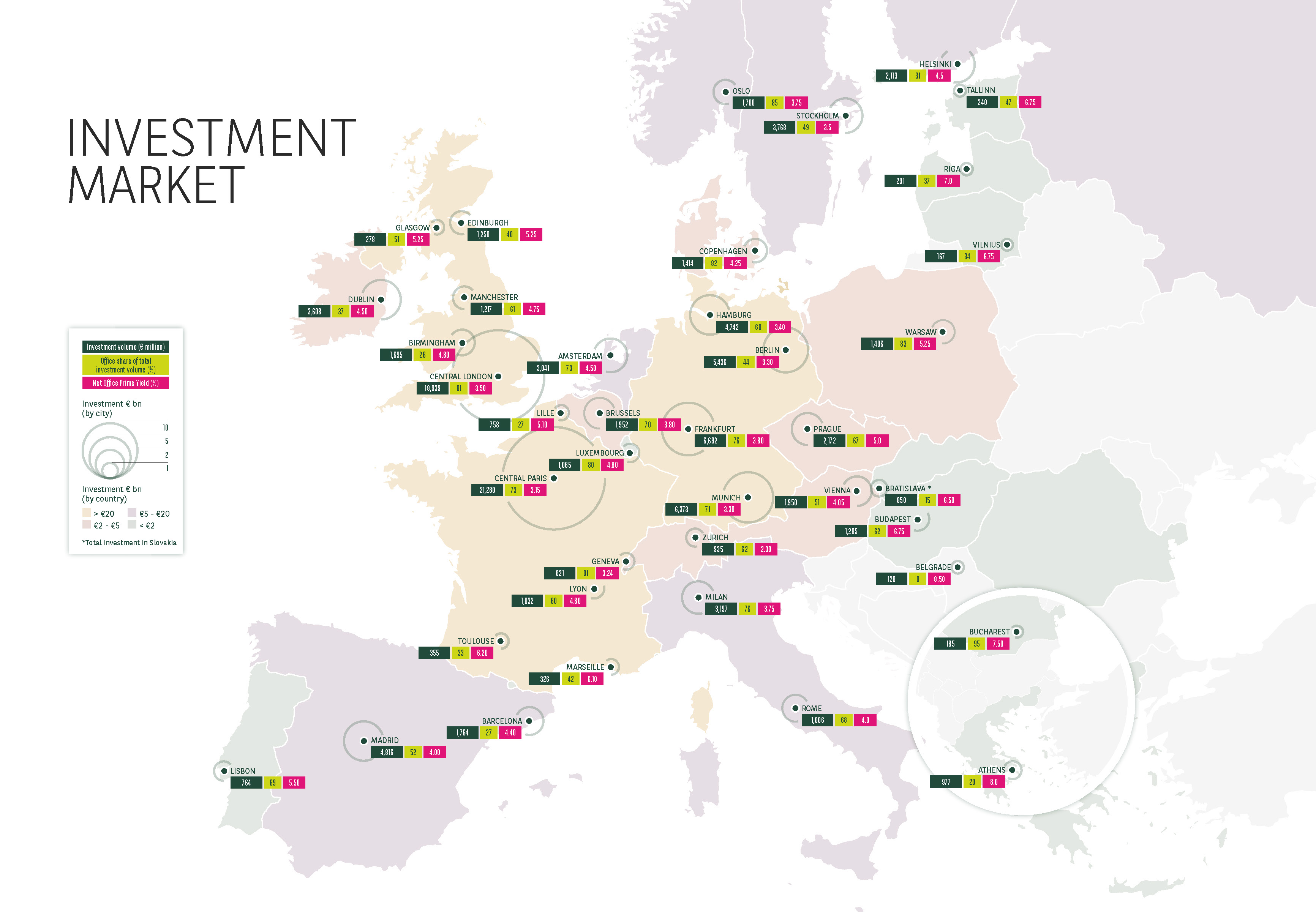