COWORKING TRENDS IN EUROPE IN 2018: THE MARKET IS TAKING SHAPE WITH WIDESPREAD GROWTH

The coworking market in Europe is taking shape according to the report from BNP Paribas Real Estate’s Research department, with major transactions in 2018. Flexible, adaptable and matching companies’ needs, coworking is becoming increasingly popular, which has led to increased deals for coworking units in the main European cities. The workspace has been rethought, to become more community-based, in the quest for other services and facilities. Real estate strategies must adapt to a range of modern possibilities.

Deals for flexible offices in Europe in 2018 (thousand sqm) 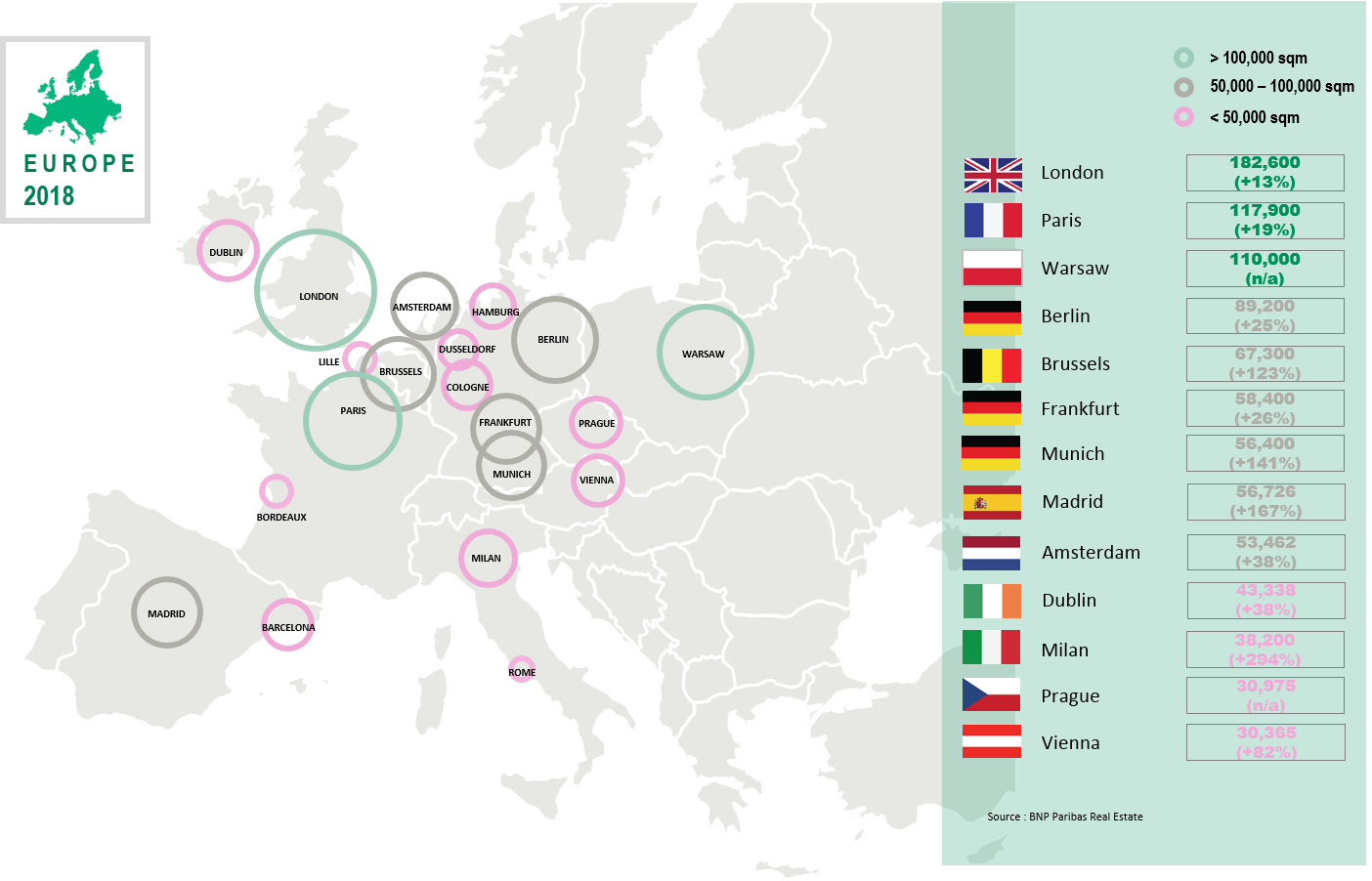 London, Paris and Warsaw have the densest coworking markets

Driven by the big global players, London, Paris and Warsaw dominate the European coworking market. London had 70 new schemes in 2018, mainly in the City and West End, the established business districts of the capital. Paris saw 28 transactions in 2018 representing total floor space of 117,866 m² (+19% vs. 2017), almost entirely in the Inner City and concentrated in the CBD. The coworking market in Warsaw was meanwhile boosted by 109,978 m² in 2018 with 32 new spaces, of which over 40,000 m2 owned by one of the global leaders in the sector.

“After the explosion in the number of coworking spaces in recent years, which has jumped from about 1,000 worldwide in 2012 to over 18,000 today, the market should be stabilising or even consolidating in certain places. Given that a quarter of coworking spaces around the world were still unprofitable in 2018, the market needs to have a rethink and evolve over the coming years. Because whereas coworkers benefit from the flexibility offered by this model, the coworking brands themselves are signing up to leases without break options and have to make their models profitable over the long term. Moreover, independent players without the means to take on the big brands are bound to position themselves on specific segments. However, the trend is towards new forms of collaboration and coworking is now a fixed part of the service landscape”, explains Richard Malle, Global Head of Research BNP Paribas Real Estate.

- Focus on London, Paris and Warsaw - 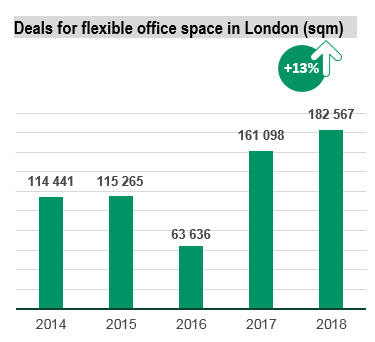 The co-working and serviced office sectors have grown considerably in central London over recent years. Indeed, in 2018, about 183,000 m² (+13% compared to 2017) of space was leased to co-working and serviced office operators. When it comes to London submarkets, the City (40% of deals for flexible office space in m² in 2018), the West End (28 %) and the Midtown (17%) have attracted great interest. The demand comes down to tenants seeking workspace that offers the ability to be flexible on leasing whilst saving costs. With both minor and major occupiers, at least in part, considering less traditional space, investors will need to change the way their buildings, and spaces, are marketed. This may include such changes as shortening lease lengths, increasing incentives, or acting more as ‘service providers’, rather than simply ‘space providers’. Landlords wanting to embrace this trend are now viewing lettings to serviced office operators less as a ‘last resort’ and more as an added amenity for larger occupiers already in the building. 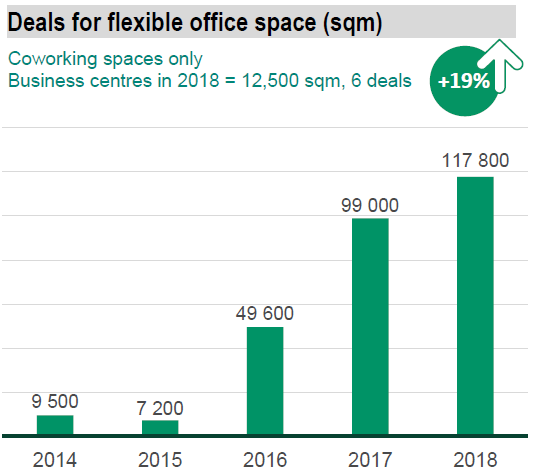 In France, co-working initially faltered but soon proved to be a real boost for the office real estate market with 28 deals in 2018 representing about 118,000 m² (+19% vs. 2017). The Paris market has already seen plenty of investment by domestic and international companies. Nevertheless, supply remains very concentrated. In particular, Paris CBD represented over 53% of deals for co-working spaces in 2018, 40% outside the Paris CBD and 2.5% in La Défense business district. Co-working continues to evolve and is becoming more professional.
Indeed, co-workers are renting increasingly large units and introducing strategies to address both self-employed workers, but also larger groups. 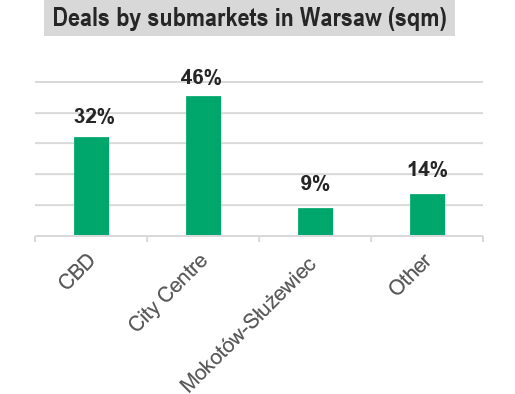 The pool of co-working operators in Warsaw embraces both renowned international players as well as local ones and own brands run by office developers. After a strong demand from co-working brands in 2017, Warsaw continued to structure its market in 2018 with about 110.000 m² of deals for flexible office spaces. Most co-working concepts are found in central office clusters: Warsaw CBD represents 32% of 2018 deals (in m²), followed by the City Centre (46%) and Mokotów-Służewiec (9%).

In Warsaw, the majority of co-working centres have been established in A-class buildings. Thus, this rapid expansion in a number of locations goes together with improving quality spaces.

COWORKING TRENDS IN EUROPE IN 2018: THE MARKET IS TAKING SHAPE WITH WIDESPREAD GROWTH