A number of national networks have emerged spontaneously to promote innovation within major groups and also to help start-ups get organised.

What position is Europe in in comparison to the rest of the world? Is it ahead or behind?
In terms of innovation, there are already European programmes aimed at supporting entrepreneurship, such as Horizon 2020 for example, that has already subsidised numerous start-ups. On the other hand, in the field of PropTech, Europe is lagging behind. The figures speak for themselves: out of 36 unicorns in the global PropTech sector, 21 are in the United States, 12 in China, 1 in the Philippines, 1 in India and 1 in Hong Kong. Therefore, 0 in Europe. The European ecosystem is however rich and promising, with 2,900 startups to date.

What are the main barriers to the development of PropTech start-ups in Europe?
Above all, the problem resides in the fragmentation of the market. Each member country has its own culture, language, legal system and industrial standards that make European structuration difficult. Access to funding is also a barrier: a mature start-up, worth over €5M, for example, will have trouble finding venture capital companies capable of providing support. At that level, funding comes essentially from the Silicon Valley – San Francisco is in 5th place as provider of investments in Europe.

There are however some positive signs. Does Europe stand a chance?
Yes, without a doubt. A number of national networks have emerged spontaneously to promote innovation within major groups and also to help start-ups get organised. There are 23 to date, and that’s unique in the world. Furthermore, we can observe the first signs of start-ups coming together, as with Aproplan in Belgium and GenieBelt in Denmark. It wouldn’t take much to up the ante! 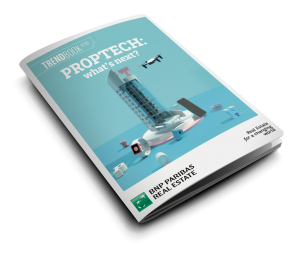 Find out how sustainability, investment and collaboration are being changed across Europe.